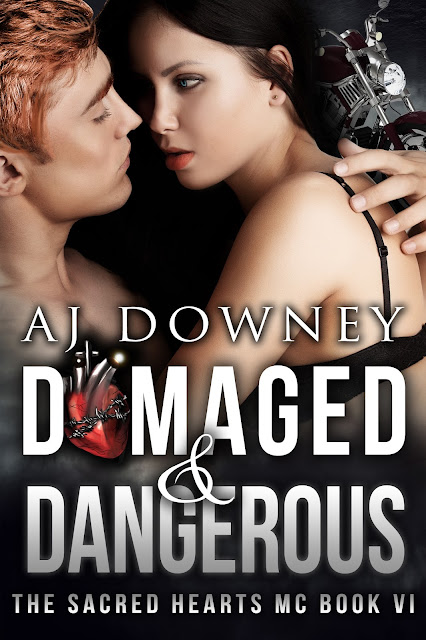 Title: Damaged & Dangerous
Series: The Sacred Hearts MC VI
Author: A.J. Downey
Release Date: September 27, 2015
Synopsis
She’s Damaged…
Dani Broussard never imagined that her life would turn out like this. She always thought that her grandfather would be there for her into adulthood and that her high school sweetheart, Jared, would be the man she would marry. That isn’t what happened though. Instead, her grandfather got sick and passed away before Dani saw the age of nineteen. It was just her and Jared until he hooked up with a local MC, The Suicide Kings… Then it was just her. Pig-Pen claimed her body, rules her life, but he would never hold her heart. Kept because of her looks and a particular set of skills unique only to her, Dani has been with The Suicide Kings for the last three years… three long damaging years. She hates it, all of it, the pain the humiliation, the fear… and as strong as Dani is, as clever as she can be, she is quickly finding that death may be the kinder, gentler option rather than live through any more of this hell.
He’s Dangerous…
Red-XIII is, and always will be, a Sacred Hearts man. But for now, he’s a Suicide Kings prospect. Tasked with providing intelligence on the King’s inner workings to his real club, Thirteen has been slowly, quietly and carefully dismantling the King’s operation from the inside out. The situation is dangerous, good thing Thirteen is a dangerous guy but even he can’t be everywhere at once and a couple of missteps have cost the Sacred Hearts dearly. Doubly determined to finish this with no more wreckage or damage to the SHMC, Thirteen is blindsided by his heart when he lays eyes on Dani. A pretty, little thing with long black hair and striking blue eyes. She slays him with one look from her damaged soul and now Thirteen has tasked himself with two missions… Take down The Suicide Kings and get both Dani and himself out alive.
For now those missions run parallel to each other but what happens if they ever end up at odds? The bigger question is, how can he get close to the VP’s Ol’ Lady as a Prospect and not get them both burned? 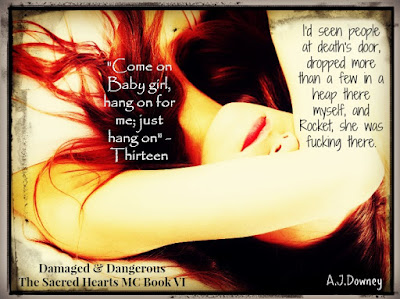 Excerpt
I finished cleaning the clubhouse all the while trapped in memory. I didn’t realize that I’d had company as I’d worked. As usual, he was there, parked on the end of the couch, boots propped on the old, scarred, garage sale coffee table, only this early in the day he’d forgone the beer in favor of a bottle of water. Another thing that set him apart as ‘other’, to the rest of the guys beer was bottled water.

I secreted a small smile in his direction and he secreted one back but we didn’t speak, we didn’t need to. Soon, Skid came around and our little private moment was in the wind but that was okay. I knew that I could or would never be with Thirteen, but having him around had become a little ray of light in an otherwise darkened room. Maybe it was foolish to hope or to dream at this stage but I couldn’t help but believe that with a guy like Thirteen around the club, maybe, just maybe things could get better.

“What you smiling about?” Skid asked me as he bellied up to the bar. I startled, had I been smiling? I glanced at the older biker and he raised an eyebrow under his faded black do-rag.

“I don’t know…” I frowned and flailed helplessly inside my head for a convincing lie, “I was just thinking about a piece I was going to try and create. I think I have all the pieces now.”

Skid chuckled, “It’s good to see you smile Rac. How ‘bout you get me a beer? One of them ones with the orange dude on the label.” He turned on his stool and started talking to Thirteen who had been grinning like an idiot behind his back but who quickly schooled his features into neutrality before Skid turned.

I rolled my eyes at Thirteen behind Skid’s back and got Skid the bottle he asked for, popping the top. I set it on the bar by his hand and he picked it up and drank, never breaking his stride as the two of them spoke bike. I was simply nothing more than furniture again which I didn’t like but at the same time was definitely the lesser of two evils.

Pretty soon Gordy, Pipes and Cooter came in from the front of the club and I was serving them up drinks when Pig-Pen and Griz made their arrival. The rest of the guys started to trickle in from the front or the back lot and girls started coming intermixed with the guy’s arrival. The party was in full swing the sky dark outside when Gordy swore and pounded his fist on the bar.

“God damn fucking son of a bitch!” he bellowed, looking at the lighted screen on his phone. Griz shoved down on the head of the strung out broad sucking him off and she choked, struggling.

“What is it now?” he demanded and let her up. She stood up disgusted and stumbled towards the bathrooms.

“Trouble!” Gordy declared, “But if we all go now we might make it, Ace and Deuce are holed up at the North West safe house, says Sacred Hearts have ‘em pinned down, four of ‘em.” Griz stood up and tucked himself back in his pants doing up his jeans.

“Boys! We’re goin’ huntin’!” he yelled. A cheer went up and I swallowed hard, Thirteen stood.

“Not you!” Gordy stabbed a finger at him.

“Take Coon to your place and keep her locked down. She’s our last bet on making any god damned money.”

Thirteen raised an eyebrow, “I live in a cabin with no electricity!” he declared.

“So fucking what!?” Pig-Pen called, “Don’t care if she’s comfortable, so long as she can produce. Don’t be god damned pussy over her pussy!”

Thirteen gave a shrug and I gathered my purse. The guys were all going out the back door to the parking lot where they kept their bikes I could already hear some of them firing up. Dredd and Flyer were chasing out the club sluts, which truthfully there weren’t many left hanging around since the club’s drug supply started drying up. I came around the bar and Pig grabbed me by the elbow, hard.

“You’re my bitch, so don’t be getting any ideas about spreading those whore legs of yers for Pretty boy over there,” he muttered savagely in my ear, his breath washing over me, a fetid mixture of whiskey and cigarettes with an overlay of just plain rot.

“I wouldn’t dream of it.” I plastered on a fake as hell sincere smile, “I know who takes care of me,” I said.

“Damn right.” And as if to prove his point he shoved his mouth against mine and his tongue in my mouth all the while looking daggers at Thirteen. I gave little resistance. I didn’t want or need any bruises except the ones that were likely imprinted on my arm from where he gripped me, besides that, I’d learned a long, long time ago that resistance was futile and only hurt more in the end. Pig-Pen finally broke the kiss and thrust me in Thirteen’s direction before going out the door.

“You good to ride?” he asked. I nodded grimly. I just wanted outside so I could spit. Thirteen grabbed my coat off the hook in the wall behind the bar and handed it to me and I shrugged into it.

“C’mon.” he put a hand on my shoulder and made like he was shoving me in front of him out the door, though his grip on my shoulder was light, not painful. He put on his helmet and glasses sitting astride his bike. I put on the spare and with one final brave smile at Pig who was glaring at me and standing with Griz and Gordy I got on behind Thirteen.

Text Copyright © 2015 A.J. Downey
This is a work of fiction. Names, characters, businesses, places, events and incidents are either the products of the author’s imagination or used in a fictitious manner. Any resemblance to actual persons, living or dead, or actual events is purely coincidental.
All Rights Reserved 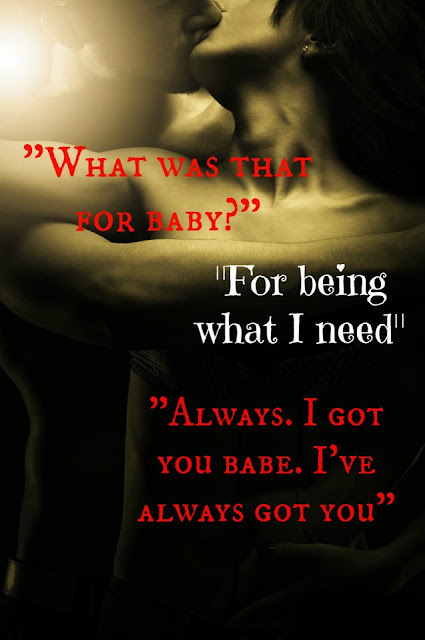 A.J. Downey is a born and raised Seattle, WA Native. She finds inspiration from her surroundings, through the people she meets and likely as a byproduct of way too much caffeine.

She has lived many places and done many things though mostly through her own imagination… An avid reader all of her life it’s now her turn to try and give back a little, entertaining as she has been entertained. She lives in a small house in a small neighborhood with a larger than life fiancé and one cat.