So a couple of days ago I said I was going to talk about this new series I started and so I am. My muse has been working over time and I am about two and a half books into a trilogy that has the potential to expand into a six book series.

Okay, so what is this series about? Is it Paranormal like Heaven, Hell & the Love In Between? Is it Fantasy based like Hunter’s Choice?

Remember how I said if you missed this blog post you’d be missing one hell of a ride?

Well let me introduce you to my latest and by far the sweetest brain child of mine: 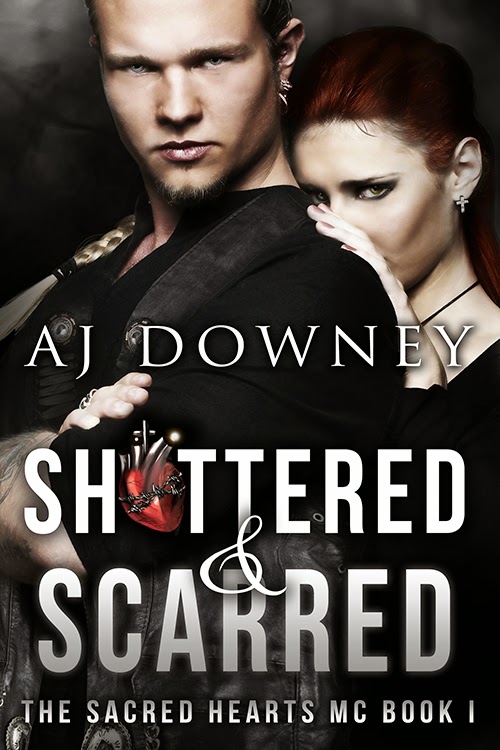 I know! I know! I know what you’re thinking!
Really? A motorcycle club? This has so been done before! And you’re right, it has, but it hasn’t exactly been done like this. Just as if you were in the bookstore and plucked this bad boy off the shelf, the first thing you would do is read the back cover. So here’s that:
She’s Shattered…
Ashton Granger is a perfect wife to her husband. She has to be, if she’s not, he will find a way to correct any perceived imperfections. Such is life, and so it has been for a very long time, eroding Ashton’s sense of self, cracking her sense of worth until she lays in a million pieces on the side of a stretch of lonely highway.
He’s Scarred…
Ethan “Trigger man” Howard is the Sergeant of Arms for The Sacred Hearts Motor Cycle club. After several tours as a Marine Corps sniper overseas, he’s seen and done enough damage for a man three times his age. He’s out. Done. So over it, and home to nurse his wounds, physical, emotional and psychological with the help of his MC brothers. Now he simply deals with the scars that life handed him.
Was it more than just luck for he and Ashton both that he was the only other soul traveling that isolated stretch of highway that night?
**Mature Audiences Only (18+)**
**Language, Violence, and Sexual Content including one very hot MMF threesome!**
That’s right. I pushed the envelope and even my own comfort zones writing this one. So if that’s piqued your interest, I really suggest you stay tuned because in the coming weeks before this book’s June release I’m going to be talking some about these books and maybe, just maybe might put up a preview of coming attractions…
So in the meantime, let that hot as hell image of Trigger and Ashton soak into your brain and until next time, my loyal friends and readers!
Much love.
~A.J.
﻿