Maybe it’s just me, maybe all the romance authors are PMSing at once, I don’t know… but yesterday as I lay, surfing my couch wallowing in the misery that was Seattle’s non-stop dump of it’s special brand of liquid sunshine, I read a bunch of shit on Facebook, a bunch of shit that had me steaming mad by the end of reading it and left me wanting to fire back.

I didn’t go off half cocked. I stewed over it and vowed that if I were still pissed off about it this morning I would do something about it.

I’m still pissed off about it this morning so here we go!

So you’ve finally ‘made it’ as an author. You’re published, people actually like your shit and buy it in droves. You are making enough money to live comfortably, maybe do some travel… You’ve landed on some bestseller’s list somewhere or are considered at the top of your genre. Congratulations! You worked hard to get there and you deserve what you’ve earned…

What you haven’t earned? That puffed out chest and extreme sense of entitlement you’re carrying around showing everybody who looks your direction.

What got me started on this? Two things actually. First, and the only one worth really mentioning, was the author/book critic who went on a massive rant/tear on her Facebook page about how there is absolutely nothing good out there to read that all these newbie authors are doing it wrong and how she’s sick of  “shitty books” with no conflict, wandering plot lines, insipid characters… Then proceeded to round out her rant ordering all new would-be authors to find a copy editor before they even think about having a go at publishing. 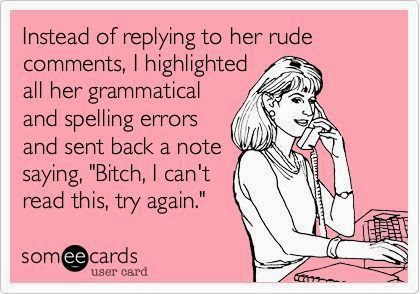 Who the fuck do you think you are pissing on people’s dreams? I bet you dollars to doughnuts no one said anything of that sort to you the first time you hit the self-publish button. And if you were traditionally published? Well that’s great, not all of us are so lucky to be picked up by a traditional publisher, that doesn’t mean that we don’t deserve to self-publish, that doesn’t mean that our work doesn’t deserve to be seen by anybody either.

I’m sorry that when I first started out that my first book was more than a little rough around the edges for your discerning and oh so refined tastes… I’m also sorry that when I first started I was barely making ends meet working my day job and every last red cent of my paycheck was going to things like, rent, electricity, water, sewer, garbage, clothes to put on my back, food to go into my stomach and for some of us? Medication so we don’t die! Because you know, with all of those things, $700.00+ for a professional editing job from a true professional editor? Piece of cake! I’ll fork that right over.

You bitched about characters that were “Too Stupid To Live” well maybe, just maybe, there comes a point when you’re too stupid to internet. Yeah you may have passed that point back there somewhere.

We’re authors. Each and every one of us are writers, independent, traditionally published, self published, it doesn’t matter… we all have some things in common. We write stories, we want to entertain people with those stories, we’re passionate and the big one here? We don’t need any more negative bullshit than is already out there.

TL;DR for this point? If you don’t have anything nice to say, don’t say anything at all.

Now does anything I just said mean that I think someone should type up their story and just slap it on Amazon? No.

Do I think you should go over it, go over it again, have your mom, best friend, husband, wife, girlfriend, boyfriend, purple people eater from Mars go over your book or story and make suggestions before you go over it one more time and if you can afford it pay an editor to definitely make sure there are no typos, spelling errors, major punctuation fails and then… only then… give it a go?

If you want to be good at what you do then there is some due diligence involved, but what I don’t want you to do, is when you make it… your work gets a following, you start selling a bunch of copies, don’t you dare get some kind of inflated sense of ego and think that you are the end all of be all’s of the literary world. You wrote a book. People liked your book. Look around you. A lot of people have written books, a lot of people have had their books liked and have sold thousands or even millions of them.

That does not make them any kind of literary authority figure. That makes them some dude, or some bitch that managed to put a bunch of words on paper in an order that was pleasing to a bunch of people.

Now. I really hate bitching about shit and not having any solutions/without being a part of a solution. So if you are a just starting out author, want some advice, are looking for some good resources, you can contact me. Message me through here, on Facebook, whatever. I’ll do what I can to help and if I can’t help I know people who can and who will.

With the exception of the broad who set me off, the indie community is a pretty great and supportive place. You’d be amazed at what’s what out there. So when you’re manuscript is all finished, all the way up to ‘The End’ take a deep breath because it’s time for phase two which can be and usually is just as labor intensive as phase 1, which was writing the book in the first place… just not as fun.

Supportive people who believe in you and who want to help you rather than just bash you/make fun of you/tear you down are out here. Where there is a will there is a way and there are a lot of ways to go about this that you can put out a quality product without having to take out a loan to get there. If I could do it, so can you.